Smashed by drought, bushfires and pandemic…but the economy does “okay”

Βut the current June quarter will be a lot worse when the figures come out in early September. A lot of the experts are predicting a 5-10 per cent contraction in the June quester, an improvement in the September quarter and maybe back to an expanding economy in the December quarter.

But there is important caveat… that Australia’s COVID curve stays flat. If we get a second wave here in Australia and need to go back into lockdown, then all bets are off.

Small Business lifestyle · 222. How DIY PR can pandemic-proof your business

Further economic stimulus is also on the cards as seen by this week’s home builder grants and both the Arts and Tourism sectors also may be in line for additional funds.

So far, $285 billion in stimulus measures (around 13 per cent of GDP) have been promised by all levels of government and the Reserve Bank.

The world has noted the good news story ‘down under’, pushing the Aussie dollar to near US70 cents. If the dollar continues its ascent, that could slow momentum of export-focussed sectors and companies.

The Reserve Bank maintains its optimism

RBA board meeting day on Tuesday and, as expected, they kept official interest rates on hold. That’s despite some economists wanting more cuts into negative rates.

I reckon the RBA is very reluctant to go into negative territory (it didn’t work when Japan did it for an extended period) but will keep rates at this low level for some time.

According to the RBA, the best barometer of the economy you should be following is consumer confidence.

“In the period immediately ahead, much will depend on the confidence that people and businesses have about the health situation and their own finances.”

“It is possible that the depth of the downturn will be less than earlier expected.”

Remember Property is driven by demand and supply

That’s why it is important to follow the level of properties coming onto the market and being built… that’s the supply side.

On the demand side, history tells us the number of buyers is influenced by immigration, interest rates and unemployment levels.

Figures released by SQM Research show national residential property listings increased in May by 3.9 per cent  to 304,137… down by 12 per cent for the year.

All capital cities experienced increases in property listings over the month except for Canberra. The largest listings increase were in the big Melbourne and Sydney markets… 11.6 per cent and 10.9 per cent respectively. Hobart also recorded a large increase.

Overall, there was a rise in listings at the national level, driven by older stock not selling. We have recorded a 12 per cent increase in listings of over 60 days.

This tells me it is a patchy market with vendors struggling to meet their pricing expectations. New listings actually fell for the month at the national level, which is abnormal for May.

Though we have recorded rises in new listings for Sydney and Melbourne, other cities such as Brisbane, Adelaide and others recorded a decline in new stock. Many regional locations also recorded falls in new listings. 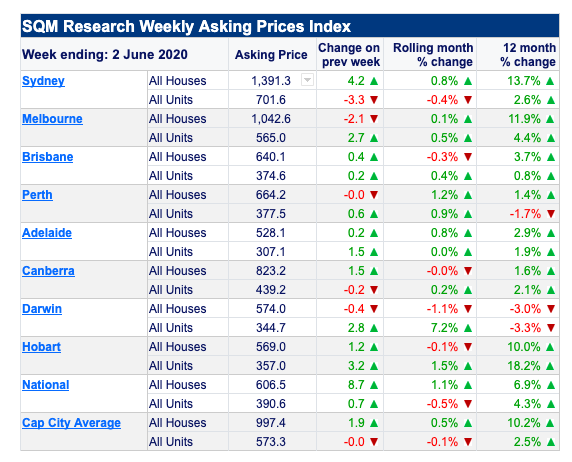 Connect with 128,556 soloistsJoin the movement

128,556 people use Flying Solo to help them create a business with life. Do you?