I’ve mentioned this before, but it’s worth restating, while Government debt will obviously rise to fund the economic stimulus packages the debt level is easily manageable… and it’s borrowing at an interest rate of less than one per cent. For example, just this week the Australian government sold $2bn in bonds set to mature in 2030 at an average yield (interest rate) of 0.8759 per cent and had demand from investors of more than three times the offer.

Bottom line is lots of demand for our government bonds from major international institutional investors at very low interest rates.

This chart shows our current debt level, and post pandemic, really well. Australia’s Gross Government Debt as a percentage of the economy before the Covid stimulus was 45 per cent … the dark line next to us on the chart.

The yellow line shows how much our debt will rise to finance the stimulus… 19 per cent.

So after the stimulus our Government debt (mortgage) to the size of the economy (the house) will be 64 per cent. 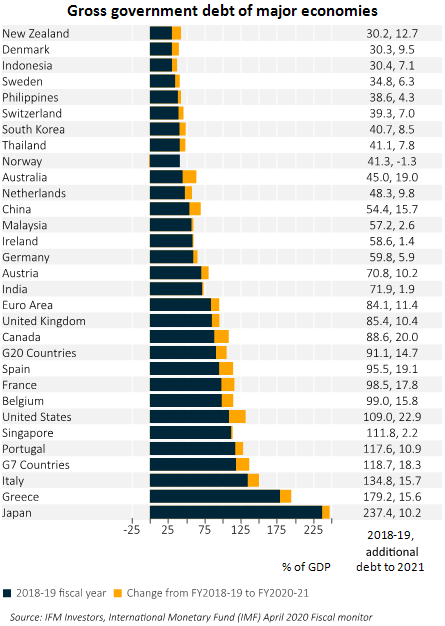 And the RBA is still comfortable

While everyone expected the Reserve Bank to keep official interest rates on hold at the current record low 0.25 per cent, it’s their commentary which everyone focussed on.

Which is still pretty optimistic despite Victoria’s second wave.

They cautioned that the “outlook remains uncertain and the recovery is expected to be bumpy”, but emphasised that “conditions have, however, stabilised recently and the downturn has been less severe than earlier expected.”

Australia’s overall success in containing the virus was behind a “pick up in retail spending” and “while total hours worked in Australia continued to decline in May, the decline was considerably smaller than in April and less than previously thought likely.”

With the Aussie economy “experiencing its biggest contraction since the 1930s,” the RBA reaffirmed that “it is likely that fiscal and monetary support will be required for some time.”

Low interest rates are getting lower

For example, UBank has cut its variable home loan rate by 0.1 per cent.

The reduction could save owner-occupier customers paying principal and interest save $400 a year on a $400,000 home loan.

Since June last year, UBank has lowered our variable interest rates by 1.1 per cent in total … potentially saving customers an additional $4,380 on a $400,000 loan in the first year and possible $85,000 over the 30 year loan term.

But, as I said, good news for borrowers and bad news for savers. Look at how low the savings rates are. 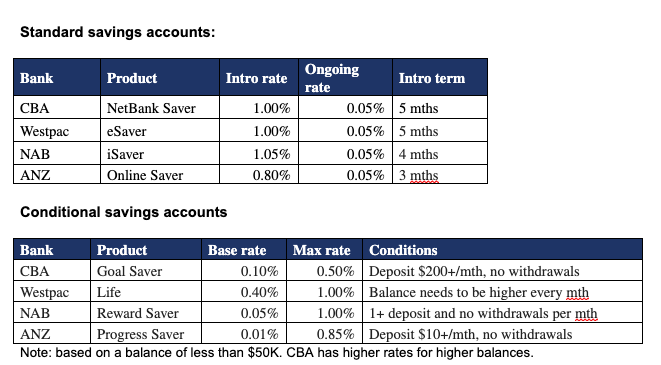 Connect with 128,460 soloistsJoin the movement

128,460 people use Flying Solo to help them create a business with life. Do you?